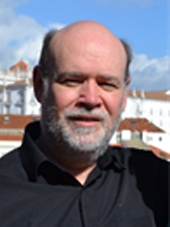 Chris looks forward to working with MA members around the UK and beyond during his presidential year and would be pleased to receive requests for help, together with constructive observation and comment both about his work and that of The Mathematical Association via email chrispritchard2@aol.com

Chris has embarked on a series of essays with an overarching theme of the visual in mathematics. One essay will appear here each month.

A little about Chris...

Chris studied at Sheffield University and London South Bank University, and was later awarded a doctorate in the history of statistics by the Open University.

His career in mathematics teaching spanned almost four decades, first in London, and then as a Head of Department at schools in the Western Isles and central Scotland. Almost from the outset, he contributed articles to journals, including The Mathematical Gazette and Mathematics in School, so that now he has almost 300 publications.

His books include The Changing Shape of Geometry which he edited on behalf of the Mathematical Association and which features contributions from leading mathematicians and educationalists.

Recently, Chris completed his trilogy on the elementary mathematics of area, A Square Peg in a Round Hole, The Room in the Elephant and Pack up a Penguin – all available from the MA’s online shop

Inevitably perhaps, writing led to editing. In the spring of 2005, Chris became the sole editor of the Scottish Mathematical Council Journal and co-editor (with John Berry) of Mathematics in School, roles in which he continues to this day.

He sees editing as a natural extension of teaching, encouraging others to present their ideas in the best possible way, and it has been a source of fulfilment for him. Speaking at conferences and at other meetings has also brought fulfilment and Chris has been pleased to accept invitations to present in venues around Britain as well as in the States and South Africa.

Chris has been heavily involved in committee work for the MA, leading the Scottish Interests Group in the 1990s and serving on Teaching Committee for 12 years, four of them as Chair. His uninterrupted service on MA Council goes back to 2009 during which time he also joined Standing Committee as the Association’s Secretary.

Perhaps the most significant of all these roles was as Chair of Teaching Committee at a time when opportunities presented themselves to engage positively with government on issues such as the early and repeated presentation of candidates for GCSE. Chris’s committee work in Scotland culminated in a 5-year stint as Chair of the Scottish Mathematical Council.

3. A Shot in the Dark: Exercises in visualisation