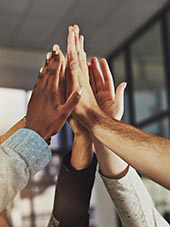 There are three documents that can be found at here that have been agreed by the five classroom facing mathematics associations, ourselves, ATM, AMET, NANAMIC and NAMA on the proposal to come together as one new association ‘Association for Mathematics in Education’.

We would encourage all members to read them, in particular the Draft Proposal for the putative new association and the Frequently Asked Questions. The former sets out a potential structure for the new association whilst the latter should help to clarify many questions and doubts that colleagues might have about the move to come together.

A clear advantage of being one association is that, like the Association for Science Educators (ASE), we will be able to speak with one authoritative voice about mathematics education in schools, colleges and mathematics teacher education. Government of any stripe will not be able to divide and rule, cherry picking whatever opinion they wish from amongst us, as they are able to do at present. A second advantage is that there will be one association to be promoted to trainee teachers, not two rival ones as is now the case. Having to make such a choice means that many trainee teachers choose to join neither association. And the profession is the weaker for that non-choice. A third concerns working with initiatives such as the NCETM as well as non-governmental bodies. To take an example from the latter, membership of the Council for Subject Associations (CfSA). All the members of CfSA are subject associations representing those subjects taught in primary and secondary schools, with one exception, mathematics, where the representing body is the Joint Mathematical Council (JMC). But why JMC? The answer is obvious, with five classroom facing associations in mathematics education that representation has to come from a body more distant from the classroom. But that should not be the case and raises the question, where else is the voice of mathematics education in schools and colleges not represented or represented by the wrong body because a choice cannot be made between five associations as to who that representative body should be?

The MA now has in place, through revision of its articles to include proxy voting, the ability to ask all the membership to vote on the issue of coming together. The other associations have similar provisions. Legal advice on the process has been sought, including how to set up a charity named the Association for Mathematics in Education, by the group working on the merger of the five associations. Plans are further advanced than they have ever been in terms of other efforts to merge. Perhaps it is time to vouchsafe an opinion?